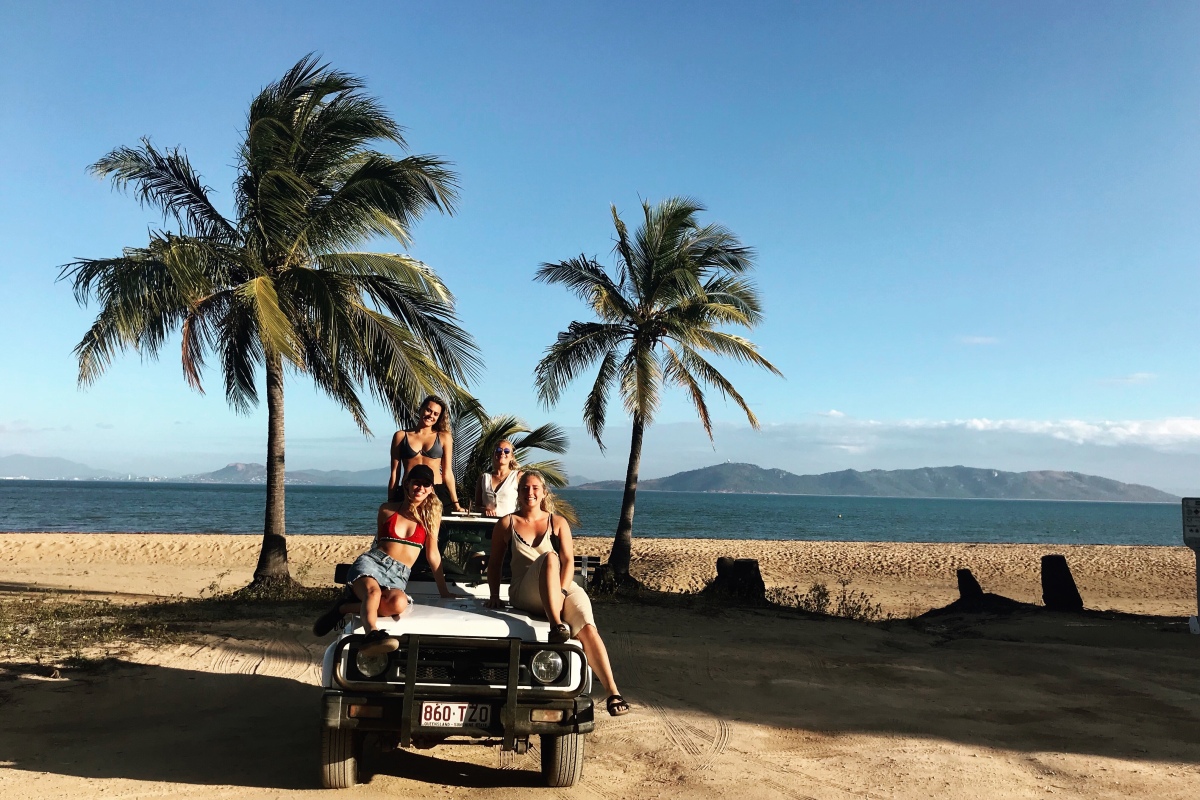 After our final night in Airlie Beach, we got up and drove to Townsville. Townsville is quite a dead town and we just wanted to get there and sleep before our Magnetic Island tour the next day. We stayed at Rowes Bay campsite which was quite expensive (#37 for 2 people) but it was nice enough.

The next morning we got the ferry across to ‘Maggie‘ – why do Australian’s always shorten everything!? It was only 25 mins and we paid $2 on the other side to get a bus to Base Hostel. The hostel was pretty cool it was right on the beach front and had a big bar, pool and was covered in fairy lights.

On our first day, it was pretty cloudy and we didn’t have much to do so we just got really drunk & made some new friends!  The night was really fun, we did a load of fun games –  Gabby and I wanted to win so so badly but we didn’t.

The next day we hired a 4×4 and drove around the island and it was such a fantastic day.  The car was SO old and so hard to drive but also amazing at the same time – it was an open-top which is exactly what we wanted. We were also so lucky with the weather with this being the only sunny day in the whole week.

First on our list of things to visit was the Forts. You walk up to it and it has 360 views of the whole island. The next stop was Radical Bay because it was supposed to be this ‘instagramable’ beach with a piano on it (I didn’t see any pianos – definitely missed something). Also, we were definitely not supposed to drive there… the roads were absolutely terrible! It was proper off-road. It was only once we got back into town that we noticed the map stuck to the car saying basically don’t drive here otherwise you’ll get fined… oops! Luckily we didn’t get caught.

After Radical Bay was Horseshoe Bay where we stopped for lunch and had an ice cream. We also went to the ‘Butterfly Forest’ which is basically this forest just on the side of the road but if you tap the trees loads of butterflies start flying around you. It was pretty spectacular.

We then went a picked up some beers and headed to West Point to watch the sunset. Thanks to Gabby for being designated driver. Our brilliant day was then followed by a fantastic night. We partied on the beach and had a bit of a boogie – all the tours we’ve been on have been fantastic! They’ve definitely been my favourite part of the trips.

The next morning we woke up and I was actually dying. We got the ferry back to Townsville and then went to the hostel Rambutan. This hostel is SO nice. Dorms are only $24 but the place is amazing. Its got a lovely pool and outside area and a restaurant and bar. It’s more like a hotel than a hostel. Two of us bought rooms so that everyone could sneak in and use the facilities while the other two slept in Fran.

The whole day everyone was pretty hungover and unable to speak or think so we just chilled in the hostel all day and got a $5 dominos for dinner (well Riss had salad, as usual, I’m just not that strong). Because you really don’t need 6 weeks to do the East Coast we had a lot of time to kill, we ended up chilling the whole next day in Rabutan as well. We tanned and it was lovely. That evening we drove to a free campsite which was actually in a BP garage! It did the job and the next morning we started on the journey to Mission Beach – there was going to be a lot of driving in the next couple of days.