The trip down to the south island was less than lovely. I’d actually go as far as saying that we were quite disgusting. Apart from me, everyone was lying underneath the tables in the relatively fancy ferry café. So glad my friends were upholding the high opinion everyone has of millennials these days. We didn’t get to the hostel until around 6pm so we just made dinner and chilled. Kaiteriteri is supposed to be this beautiful beach but it rained the entire time we were there and I got eaten by sandflies.

The weather was shocking and the whole day was pretty much dedicated to this very bizarre stop off in a tiny town called Westport.  We somehow drew the short straw and ended up in this horrible little minibus and I was shoved in the back row in the corner. In all honesty, it would have been fine as we were supposed to be stopping off Nelson Lakes for a picnic, however about 10 minutes into the journey the bus broke down. So to set the scene: it was raining cats and dogs, it was hot and humid and we were stuck in this dingy little town in the middle of no-where for an hour while a new bus came. Once we got on the new bus all seemed to be looking up, until a car coming towards us span out and we stopped to make sure they were okay. After our selfless act, we were all rewarded with the second bus breaking down. By the time the driver had got this bus working again, we were practically sliding off the fake leather seats we were so covered in sweat and were starting to feel a little sorry for ourselves.

In the end, we made it to the lake and even though it was misty and raining was still stunning. The mist actually gave it this beautiful but eerie feel, with the mountains in the background shrouded in a grey fog. A few of the boys went for a dip and for the classic ‘diving off the pier with the mountains in the background ‘gram’ (see exhibit A and exhibit B), there were eels in the lake so that was a firm no from me. 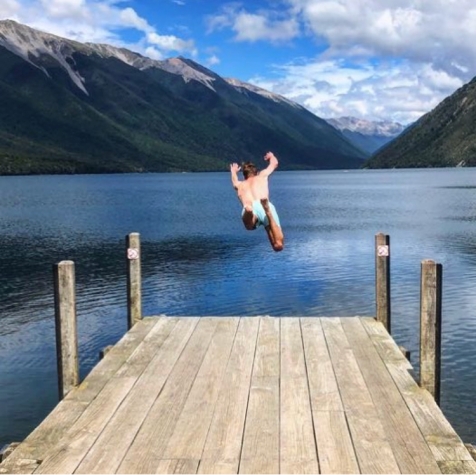 We eventually got to Westport around 9pm and so had enough time to watch a movie and go to bed, thank god our room was nice! It was a self-contained unit with a double bed, 2 bunk beds upstairs, an ensuite, a mini kitchen and a TV with a DVD player. On Riss & Christie’s recommendation, we watched a terrible rom-com called the Ugly Truth and I don’t think I’ll ever get those hours back.

Westport used to be a big mining town and is famous for its surfing, apparently. I went for a run around it the following morning, and even though I only ran 6km, I was able to run the perimeter of the town, twice. I didn’t see a beach and the creepy ghost town-esque streets were completely deserted. What I did find out, later on, was that when the coal mines shut down (New Zealand is now 80% run on clean energy), everyone just got hooked on meth. Lovely little town.

We all boarded our awful minibus the next morning and headed for Lake Mahinapua. We stopped for a short walk along the coast at Cape Foulwing and then again at the Pancake Rocks walkways; the views were really lovely and the walk easy so it was a nice break from the bus!

Where to wander to next?

The next stop was Greymouth (also a weird, small town) where we had to get food and a costume for the evening! The hostel you stay at by Lake Mahinapua is basically just a big party and each night has a theme, our was anything beginning with the letter ‘P’. Luckily for me I already had a snake dress (python obviously) so found some fishnet tights for a fiver to do my makeup and that was that. Once we got there Cam and I opted to do some Greenstone carving, for $20 you get to make your own peeve of green stone jewellery. The Greenstone is a sacred stone to Maori people and if you buy what I made in a shop it would cost you around $100 (and you don’t get the joy of making it yourself… I was very much an ‘Art Attack’ kid.

So proud of my necklace

Two pirates and a python walk into a bar…

All the fun activities you can do at Lake Mahinapua

There were quite a few pirates that evening, Cam was prince charming, Jamie a princess and Jordan Paddington bear – very creative I thought for a group on a budget! We partied into the small hours to cheesy tunes and it was a very fun night!

Feeling a little bit ropey,  we got on the bus to head to Franz Josef. Luckily the ride wasn’t long and got here just after lunchtime. We didn’t realise beforehand, but this place is a bit of a party hotel as well! Looks like we’re going for 2 days on the trot guys and gals. In the afternoon we got some good old admin done, washing, Cam and I went to go pay for our kayaking we were doing the next day. We also all went shopping for our secret Valentines. As we were all single or our other halves weren’t with us, we decided to do a secret Santa style valentines day. We all got given a random name to buy a present for and a $10 limit.

Franz Josef is a tiny but beautiful town, set in a valley between rainforest covered mountains, it’s extremely picturesque. That evening’s theme was a traffic light party (where you go as either green (your keen), orange (it’s complicated), or red (your taken) –  how incredibly cringey. Obviously, it still ended up being a very fun night as they had $5 cocktails and we had such a good group of us.

Getting Cam up for an 8am Kayak on a hangover was quite a task. He silenced his alarm 3 times and it took me physically pulling the duvet and pillows off his bed to make him get up. After the ropey start, the kayak was actually beautiful, so glad we did it. There was so wind so the lake produced fantastic mirror images of us and our kayaks with the glacier as the backdrop. It was slightly romantic (sorry, Lewis!) and the best bit was that Cam is a genuine powerhouse at kayaking… I didn’t really have to paddle at all.

When we got back and once the rest of the crew and slowly pulled themselves away from their beds, we all started the walk to see the Franz Josef glacier. We didn’t realise at the time but it was about a 16km/4 hour round trip. 20 minutes into the walk it started POURING. Not just a drizzle, or even a shower, the rain was bouncing off the road it was coming down so hard. Luckily being the prepared woman I am, I was the only one that had brought a rain jacket with me.

Luckily, the rain did stop after about 10 minutes and the sun came out and we dried off pretty quick. I can’t say that I was that impressed with the Glacier. If you actually had any money, you can get a helicopter up to the top and walk through it. Two of our friends, Jess and Ollie, did the Heli-hike and the pictures looked insane! If I’d had a spare $500 I definitely would have done it. Instead, I walked 4 hours in the rain to see a lump of ice from afar.

That evening we all exchanged our secret Valentines gifts; it was actually very cute. Some people may have taken it more serious than others e.g. Rissbrook got me a cuddly Kiwi toy (now called Kevin), a flake and a box of Shapes – my favourite childhood snack! Jordan, on the other hand, got Jess some self-tanning moisturiser because she’s so pale…. That night it was the all you can eat pizza fest, they have this every second night – I mean, fancy restaurant or pizza fest? I think you know what my choice would be.  Being the completive bunch we are, we couldn’t have an all-you-can-eat without a slice competition. It’s safe to say we practically rolled ourselves into bed after that for a well-needed, food-coma induced early night.

The next stop on our trip was Wanaka, a place which is apparently fast becoming the ‘New Queenstown’. One our en route stops was at Lake Matheson which gave unreal reflections of Mt Cook and Mt Tasman. I’ll admit I indulged a bit here and got the cafe’s breakfast special which included rye bread, poached eggs and black pudding!! Dreamy.

The weather had thankfully perked up a bit and when we got to Wanaka we went to the beach for quick tanning sesh. We did that for about 2 minutes because it was unbelievably windy. Riss and I then headed to a bar while the rest went to find ‘the most Instagrammed tree’ which is on the edge of the Lake Wanaka. I’ll admit the pictures did look quite cool and the travelling pianist was there as well! (V. good for the gram).

We spent the rest of the early evening drinking wine and playing pool on the lakefront. After eating, me Ollie and Jess went out to this weird Irish pub which had live music. The hostel bar had given us a few free drinks and if there had been a huge group of us it could have been a great night but because but there wasn’t we’d all started quite early so ended up being in bed by 11:30. The rest made a blanket fort and watched Paddington 2, I have no idea when we turned 40 or 4, respectively.

Kaiteriteri:Kaiteri Lodge – a very average which charges a $20 deposit for cutlery and a key. The Kitchen small but adequate with a few BBQs. Our room was a bit smelly but beds quite comfy.

Westport:Bazils – had really nice rooms. Didn’t have enough time to actually check out any of the facilities but in a town this small (and weird) I think just take when you can get.

Lake Mahinapua: Lake Mahinapua Hotel – this is the only hostel here but its great. It caters only to Kiwi Experience people. For $55 (around 27 pounds) you get dinner, accommodation, a free shot and breakfast; a really good deal and the food was actually so good.  They have volleyball court, two hot tubs, a fully stocked bar, the rooms are basic but clean and it’s only a short walk to the lake

Franz Josef: Rainforest Retreat – I really liked this hostel. The rooms had small kitchens and their own bathrooms/showers. We were lucky as by this point we were travelling as a group of 8 and therefore could basically have a private room. They had a really nice bar and restaurant there as well. I don’t really think there are many other places to stay in Franz Josef, to be honest! It’s a very small town.

Wanaka:Base Wanaka – actually quite a nice hostel. Again there was 8 of us so we managed to get a ‘private room’. The room was quite small for 8 people but the hostel is very central. Didn’t cook here so not sure how the kitchen was.