It’s quite exciting to feel like we’re back to really travelling. Melbourne was this weird bubble I felt like we existed in. It was half work and half play but with one often interrupting the other. Don’t get me wrong, I had an absolutely fantastic time. I made great friends and Melbourne is definitely a city I could see myself living in again, but I was very ready to leave and get back to the real holiday part of my holiday working visa.

Naturally, when we arrive in Sydney we were all completely and utterly knackered. I managed to nap most of the day which was so nice. Having my own room and bed! I got a deliveroo Nandos for lunch and then my Aunt and I went out for dinner to a local pub.

On my first proper day in Syndey, I headed out to the famous Bondi Beach and did the Bondi to Coogee coastal walk. In complete honesty, I did it backwards (Coogee to Bondi) and spent the afternoon chilling on Bondi beach. The walk is easy, it’s around 6km and the scenery is lovely. It was quite cold so the beach was uncharacteristically empty but I still managed to get a couple hours of tanning in. 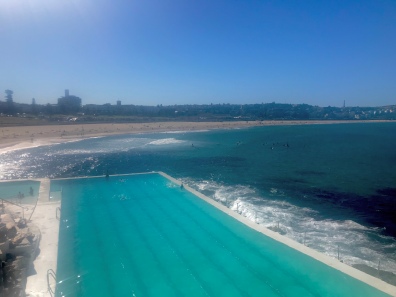 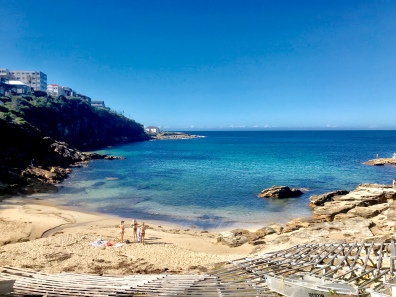 Some of the views along the coastal walk

The next day I signed up for a free week of F45 workout classes. I actually really enjoyed the class so Riss and I have decided to do them all the way up the coast together – we have to at least attempt to get bikini bod ready for Bali! In the afternoon I got the ferry over to Manly where Rosie is currently living. She’s staying with her cousin and working as a nanny for them three times a week – pretty chilled lifestyle if you ask me! When I arrived the kids were in the car and I suspect we were already a little bit late for the 4-year-olds football practice (or soccer, as it’s referred to here).

Now for those of you who know me, I am not the best person in the world with kids – I wish I was and although one of my new years’ resolutions was to be more tolerant, I still don’t have the patience! As we pulled up the house the younger of the two goes “Rosie, can Alex please wash me?”

Therefore, I was left in the bathroom with a hyperactive four-year-old trying to wash his hair from a distance without getting shampoo in his eyes (or on me), much to Rosie’s amusement. Once the kids were in bed, Rosie and I retired to the sofa with a bottle of wine, a Thai takeaway and the Hottub time machine – a very chilled evening indeed.

I was woken up by the sound of screaming children at 7am but if I’m honest I was up anyways (although I did complain about it, obviously). Once the kids were at school, Rosie and I walked along the coast to Shelly Beach, a smaller beach 15 mins away from Manly beach. We had a fantastic brunch (well I did, Rosie had a coffee) at a place called The Boathouse. I had the bacon flatbread – basically a breakfast pizza… what could be more perfect. We then jumped in the car and headed to a smaller, more secluded beach called Balmoral Beach. We spent the rest of the day tanning and thank god we did, it seems as if it was the last day of sun we’ll get for a while!

Nearing the end of the week I was starting to quite like being a lone traveller and went to the Australian Museum (so cultured). It’s relatively cheap and quite informative. For once in my life, I had time to kill and actually read a lot of what was in the museum! Knowledge is power, my friends. Following the museum, I went to Hyde Park (yes there is one in Sydney too) to catch a bit of the sun and read my book. My relaxing afternoon was mildly interrupted by a load of white Ibis (also affectionately known as a Bin Chicken) which have become somewhat of a pest in Sydney. These birds are huge! I have enough of a problem with pigeons and seagulls but these things are a whole new kettle of fish. When two of them started fighting right next to me I knew it was my cue to leave.

Friday was the day I was really looking forward to because drum roll please…. my dad was in Australia on business and had come to see me. We went across to Manly for lunch and had it in this great place called The Pantry. It’s right on the beach and the food (and cocktails) were so good. My parents lived in Manly for a while straight after uni so I think my dad was feeling a bit nostalgic. We went for a couple of drinks at his old watering-hole, the now ‘New’ Brighton hotel. Time kind of got away from us and we realised we were already late in meeting my Aunt for after-work drinks, it was safe to say we were a bit giddy on the ferry back over!

The man, the myth the legend, Sturart Bradie… and of course I found a margarita

We went for some fantastic cocktails at the Shangri-La’s bar on the 36th floor – the views from up there are phenomenal. You can see the whole harbour and beyond. We then headed to Phillip’s foote, a restaurant on The Rocks for some good-old-fashioned steak. You have to cook it yourself on the BBQ but the meat was delicious. Our final stop of the evening was to the Opera bar – great wine and a spectacular view of the Sydney Opera house, the perfect way to end such a good day. 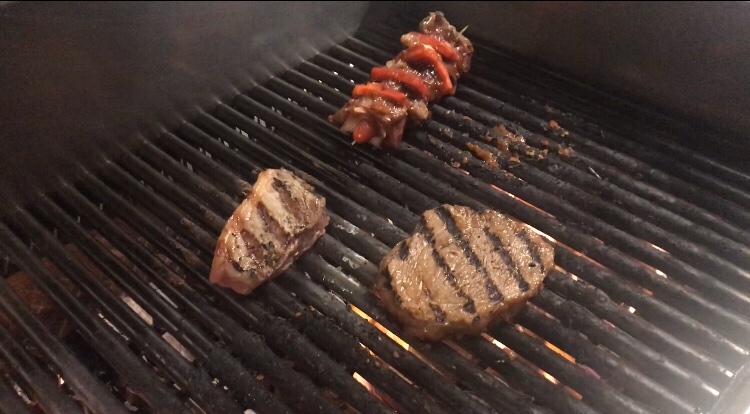 The next morning we were all feeling a bit worse for wear but we struggled on just the same. We caught the ferry to Watson’s bay, I think we were all very thankful for the surprisingly smooth ride across the harbour. Normally Watson’s bay is packed with tourists grabbing fish and chips and enjoying the quaint beauty of this small beach, but it was absolutely freezing when we went to the place was like a ghost town! It did mean that we got a fab seats inside the Beach Club and ended up chilling there for the most of the afternoon, slowly nursing our drinks to see if hair of the dog was the answer to all of our problems (it wasn’t). 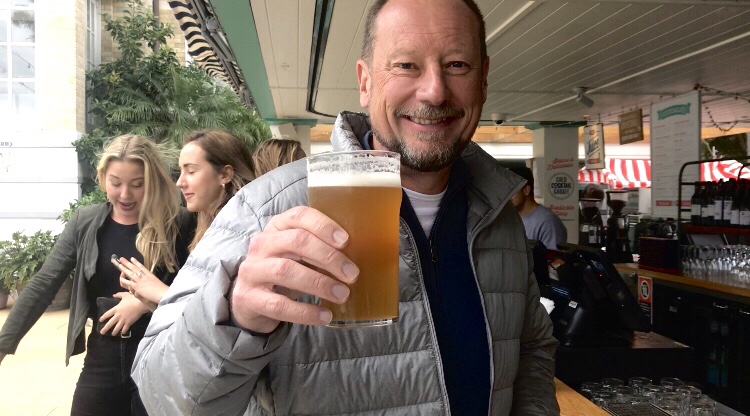 Stu always had the ability to push through the hang, these are the real role models we need

For the final meal with my dad (as you can probably tell we love to eat and drink), we went to an Italian on The Rocks called Appetito. The pizzas there are so good, nothing better than a good, fluffy pizza base to send you into a well-needed food coma. We said goodbye and it was actually really sad! I am seeing him in a couple months for our family holiday to Tuscany so can’t complain too much. I slept like a baby on that night.

After a gluttonous weekend, I actually managed to squeeze 4 F45 classes in during my second week in Sydney. I signed up for another free trial at the Leicham studio this time. I kind of got caught out as there is one instructor that floats between that one and the Petersham one! They didn’t seem to mind though! I then went for a walk along the harbour and through the Botanic gardens. It really is stunning in there, especially on a sunny day. I then walked all the way to Darling Harbour and by the end of it I was exhausted but feeling good. It’s always nice to get your steps in while exploring a city.

The next day I went to Taronga zoo with Christie’s family and Riss. We saw all the classic Australian animals; Kangaroos, Wallabies, Emus etc. It was quite a funny day and we got a good show from the gorillas at the end – the silverback was banging on his chest and everything! After the zoo, we all went for a drink and a nibble at a fantastic restaurant and bar called The Winery. The garden is covered in fairy lights and it had a great ambience. I had a fab dinner at Christie’s family’s Airbnb and a few glasses of wine, it was really lovely to feel part of a family again! 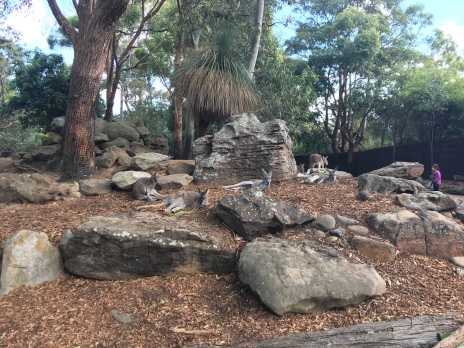 On the Wednesday, I went across to Manly again and Rosie and I did the Manly to Spit walk. It’s a really stunning walk and would definitely recommend it. We also had a very tasty brunch at Three beans and then chilled and watch a ‘docco’ as they call them here. I then went for a few pints and a Pho with my Aunt, always the perfect way to end the day!

Now I know this isn’t really true backpacker style but I ended up getting my hair done as my time in Sydney came to an end. Although it was mildly out of my budget (and by mildly, I mean completely), it was so worth it. I mean can you really put a price on looking fab?

I was lucky enough to tag along with Christie’s family for their trip to the Blue Mountains. It was a beautiful day and the scenery stunning. The reason they are called the Blue Mountains is because the eucalyptus trees release a vapour reacts with the air to give a faint blue haze. We did a couple of hour-long hikes – one at Wentworth falls and another at Evans lookout, The way down was pretty easy but getting back up the hills really got our hearts going. After those two counts of exercise, we indulged in a fantastic lunch. The tour ended with going to view the Three Sisters. It was a really nice day so a big thank you to the Knight family for letting me come along! 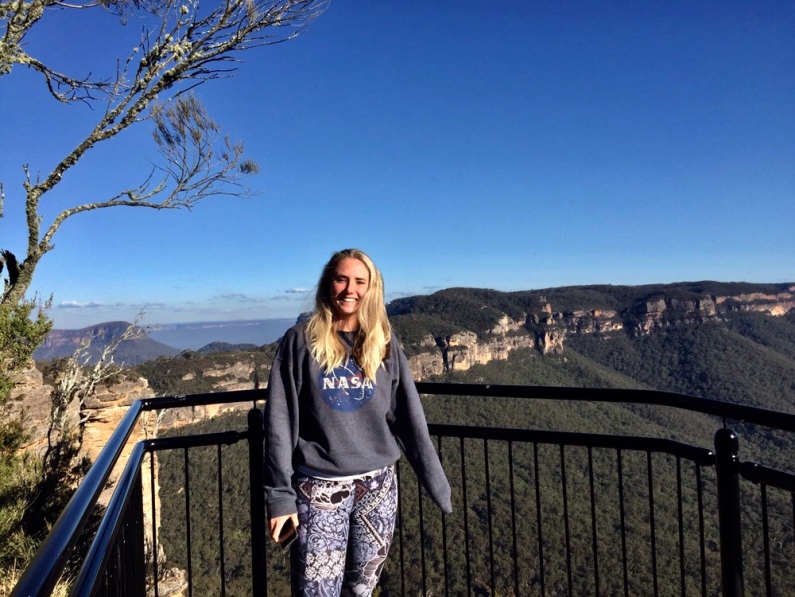 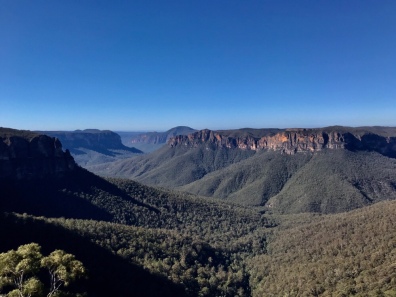 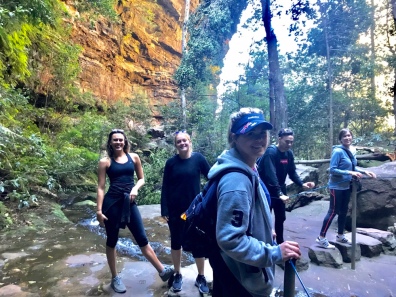 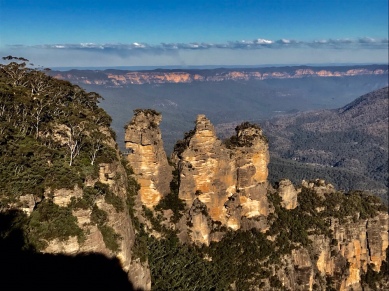 On my final weekend in Sydney, I did an F45 in the morning (go me) and then met Rosie at Glebe Market. The market was really cool, full of old vintage clothing and jewellery, as well as some good food. After saying goodbye to Rosie, probably won’t see her until September at the earliest, I headed to Christie’s family’s aribnb in Surry Hill for a fajita dinner and pres. We were all going see Huxely at the Chinese Laundry that night. On our way to the club, we stopped at a speakeasy called The Door Knock. I can’t say it was very difficult (or subtle) to find, with a huge sign on the main road, but at least having to knock a big pineapple door knocker before being let in had some novelty. The night was really good fun, the club was cool and the music great, a really nice way to end our time in Sydney. 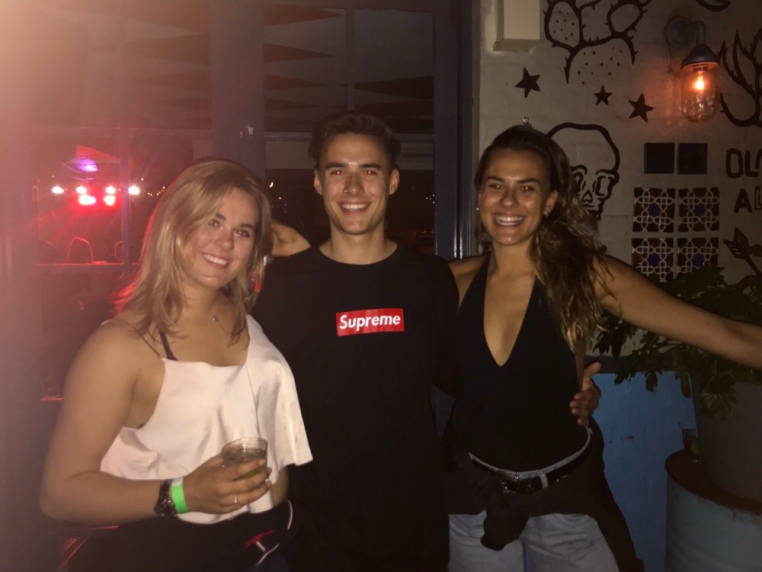 Night out with the Knight clan

Gabby arrived early in the morning the next day and we had a hangover day watching movies. I’ll admit we were super naughty and both had two mcdonalds that day. Ordering Mcdonalds to your door – what a time to be alive.

The next morning we packed up all our stuff and set off up the East Coast in Fran the Van, aka Franny.